The Armistice Parade of 1918

Armistice Day is the day commemorated every year on 11 November to mark the armistice signed between the Allies of World War I and Germany at Compiègne, France, for the cessation of hostilities on the Western Front of World War I, which took effect at eleven o’clock in the morning—the “eleventh hour of the eleventh day of the eleventh month” of 1918. According to Thomas R. Gowenlock, an intelligence officer with the US First Division, shelling from both sides continued for the rest of the day, only ending at nightfall. The armistice initially expired after a period of 36 days and had to be extended several times. Eventually these extensions resulted in the Treaty of Versailles the following year. The date is a national holiday in France, and was declared a national holiday in many Allied nations.

During World War II, many countries changed the name of the holiday. Member states of the Commonwealth of Nations adopted Remembrance Day, while the US chose Veterans Day. In some countries Armistice Day coincides with other public holidays. On 11 November 2018, the centenary of the World War One Armistice, commemorations were held globally. In France, more than 60 heads of government and heads of state gathered at the Arc de Triomphe in Paris.

In the United States, Veterans Day honours American veterans, both living and dead. The official national remembrance of those killed in action is Memorial Day, which predates World War I. Some, including American novelist Kurt Vonnegut and American Veteran For Peace Rory Fanning, have urged Americans to resume observation of 11 November as Armistice Day, a day to reflect on how we can achieve peace as it was originally observed. 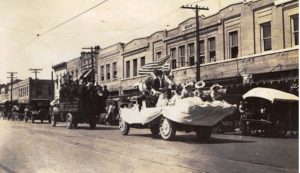 There is evidence of an Armistice Parade that took place in Corsicana in the year 1918. The picture above was in all likelihood taken at this Parade. The exact date is at this time unknown to us. If you have more information, or even photos, of this Armistice Parade from 1918 in Corsicana, we would love it if you contact us and share the information with us.

Below another picture from an Armistice Parade (albeit most likely not the one in Corsicana). 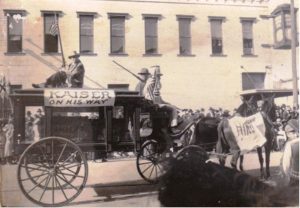