Below is a brief summary of the Korean war that lasted from 1950 to 1953. You can find much more detailed information by clicking here: Korean War on the History Channel and here: Wikipedia: Korean War. 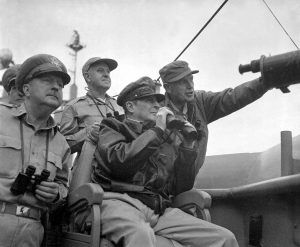 On June 25, 1950, the Korean War began when some 75,000 soldiers from the North Korean People’s Army poured across the 38th parallel, the boundary between the Soviet-backed Democratic People’s Republic of Korea to the north and the pro-Western Republic of Korea to the south. This invasion was the first military action of the Cold War. By July, American troops had entered the war on South Korea’s behalf. As far as American officials were concerned, it was a war against the forces of international communism itself. After some early back-and-forth across the 38th parallel, the fighting stalled and casualties mounted with nothing to show for them. Meanwhile, American officials worked anxiously to fashion some sort of armistice with the North Koreans. The alternative, they feared, would be a wider war with Russia and China–or even, as some warned, World War III. Finally, in July 1953, the Korean War came to an end. In all, some 5 million soldiers and civilians lost their lives during the war. The Korean peninsula is still divided today.

Ennis Lions defeated Corsicana Tigers on Nov. 1 2019, to claim the 1st Medal of Honor trophy named for Jack Lummus from Ennis and Spider Garcia from Corsicana. Both were recipients of the Congressional Medal of Honor. ...