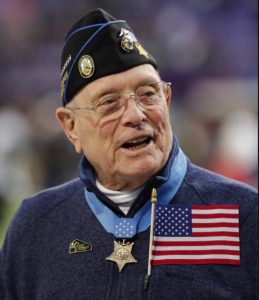 Corsicana, Texas – The Texas Veterans Parade, in conjunction with the Bill McNutt Family Fund, announces the creation of the Medal of Honor Trophy to be awarded each time the Ennis Lions and Corsicana Tigers play football. The trophy honors an American hero and Medal of Honor recipient from each High School, Jack Lummus from Ennis and the battle for Iwo Jima in World War II, and Candelario “Spider” Garcia, from Corsicana and the Vietnam war. The trophy will be kept by the winning school’s athletic department until the next game is played.

The last living Medal of Honor holder from Iwo Jima and the Pacific War, Mr. Hershel “Woody” Williams will be at the Ennis/Corsicana game on Friday, November 1, 2019, to honor his fellow Iwo Jima Marine, Jack Lummus. He will flip the coin prior to the game at Tiger Stadium in Corsicana and present the trophy. Mr. Williams flipped the coin at Superbowl 52, played in Minnesota between the Patriots and the Eagles. 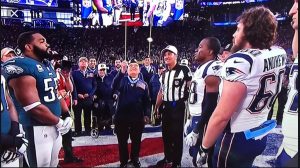 Retired Marine Corporal, Woody Williams of West Virginia said “It is unique that two Texas towns and high schools, so close together, would both have Medal of Honor recipients. I am happy to get to pay tribute to my fellow combat veteran from Iwo Jima, Jack Lummus and to Spider Garcia, by flipping the coin at this year’s game.”

Mr. Bill McNutt a 1973 Corsicana High graduate said “The Corsicana Ennis rivalry is historic and deserves a trophy that captures the spirit of both communities and pays homage to our unique past. Having Medal of Honor Woody Williams at the first game when the trophy is presented is special. ”

Shade Bouware, the Executive Director for Extracurricular Programs at Corsicana High School said “Corsicana and Ennis are patriotic communities with strong support for veterans. This trophy is unique in all of Texas and will serve as an annual reminder of the cost of freedom.”

“When our star Ennis Lions athlete was killed on Iwo Jima and received the Medal of Honor, it was a source of sadness and pride for everyone in Ennis.” said Don Drake, Ennis Athletic Director. “To honor his memory with the trophy is simply the right thing to do.”

Mr. Jack Lummus – was an All-District Football Player at Ennis High School and went on to play for the Baylor Bears and the New York Football Giants. On Sunday, December 7, 1941, Lummus and the Giants were playing a game and the Associated Press ticker in the press box gave out a message saying, “Airplanes identified as Japanese have attacked the American Naval Base at Pearl Harbor.” The players continued the game, knowing nothing of the attack. After playing in the NFL championship game a few weeks later, the Giants End from Ennis, Texas enlisted in the Marine Corps on January 30, 1942.

Lummus, a 1st Lt. was in the first wave of troops to land at Iwo Jima on February 19, 1945. He and his platoon spent the next two weeks incessantly fighting the dug-in Japanese. On February 23, he was spotting targets on the slopes of Mt. Suribachi for artillery and airstrikes. Nearby, his fellow Marine Woody Williams accepted the challenge of opening a lane for infantry and tanks through a network of reinforced concrete pillboxes, going forward alone with a 70-pound flamethrower to reduce devastating machine gunfire. Two of the four riflemen providing covering fire for him were killed. For more than four hours, Williams repeatedly returned to his lines to prepare demolition charges and obtain fresh flame throwers. He disabled six enemy pillboxes, killing all the enemies in each. President Harry Truman awarded him the Congressional Medal of Honor at the White House on October 5, 1945.

On March 8, 1945, the former Ennis Lions football player Lummus was spearheading a final assault on an objective east of Kitano Point, near the northern edge of the island. Despite minor wounds received from grenade fragmentation, Lummus knocked out three enemy strongholds, well-fortified positions arranged to defend each other, which were preventing his platoon from reaching its objective. Following this action, he stepped on a land mine and was mortally wounded. While lying on the ground, he urged his platoon on, until he was carried off to an aid station. He was awarded the Medal of Honor posthumously. He is buried in Ennis.

Candelario “Spider” Garcia, Jr. Garcia was born in Corsicana, Texas, Feb. 26, 1944 and was a 1962 graduate of Corsicana High School. He enlisted in the U.S. Army in 1963, and his actions on December 8, 1968, while serving in Vietnam caused him to receive the Medal of Honor. In a battle near Lai Khê, Vietnam, Garcia destroyed two enemy machine-gun positions in an attempt to aid casualties that were in the open and under fire, then rejoining his company in a successful assault on the remaining enemy positions. He died on January 10, 2013 and is buried in Corsicana.

The Texas Veterans Parade is held annually in Corsicana on Armed Forces Day, each May. Their mission statement is as follows: “To honor Texas Veterans of all wars and conflicts. To teach our school children about the sacrifices of Texas Veterans, Freedom, and Liberty.”

Louisville, Ketucky – September 30, 2019 The Hershel “Woody” Williams Medal of Honor Foundation, in conjunction with the Bill McNutt Family Fund and the Texas Veterans Parade, announced today that the next Gold Star Family Memorial will reside in Corsicana, Texas.

The ceremony and groundbreaking will begin at 10 a.m on Saturday, November 2, 2019, on the Navarro County, Texas Courthouse lawn.

Williams, one of three Congressional Medal of Honor recipients remaining from the Second World War, acted heroically during the Battle of Iwo Jima. His foundation seeks to establish a monument to Gold Star Families in each of the 50 states. A Gold Star Family is a family who has lost a loved one in combat or military service.

“Navarro County has a rich and unique military history going back to the Texas Revolution,” said Williams. “This beautiful and unique black granite monument sends a message to the families of those who have sacrificed a loved one in military service for us and our freedom. I have worked with Bill McNutt on other World War II veterans initiatives. He convinced us that this central Texas community deserved to be selected.”

Williams had always wondered why families who lost loved ones in battle or military service did not regularly receive public recognition for their sacrifices. Six years ago, his organization began working with selected and patriotic communities across America to fulfill his goal of a monument in all 50 states and in additional communities where Veterans were held in high esteem.

On November 2, in Corsicana, Texas Williams will talk about the 36 day battle for Iwo Jima and the sacrifice of his fellow Marines. Also speaking will be two Gold Star mothers and elected representatives from Austin, Texas and Washington, D.C. Bands and choirs will provide festive music.

“We are blessed to have Woody Williams come to our county and our courthouse,” said H.M. Davenport, Navarro County Judge. “We know the veterans community and history buffs from all over Texas will want to share this unique time with one of the last living heroes from World War II.”

“This is an evergreen monument,” said Bill McNutt, Texas Veterans Parade Co-Founder and Chair of the Bill McNutt Family Fund. “It will be a constant reminder to our youth that freedom is not free. And it will be a place for military families to gather who have placed so costly a sacrifice on the altar of freedom.”

February 23, 1945 was a pivotal day in the battle for Iwo Jima. It was the day the American flag was raised on Mount Suribachi and the day of Woody William’s Medal of Honor action.

Corporal Williams did not witness the American flag being raised. He was occupied approximately one thousand yards away with the 1st Battalion, 21st Marines. He accepted the challenge of opening a lane for infantry and tanks through a network of reinforced concrete pillboxes, going forward alone with a 70-pound flamethrower to reduce devastating machine gunfire. Two of the four rifleman providing covering fire for him were killed. For more than four hours, Williams repeatedly returned to his lines to prepare demolition charges and obtain fresh flame throwers. He disabled six enemy pillboxes, killing all the enemy in each. President Harry Truman awarded him the Congressional Medal of Honor at the White House on October 5, 1945.

Navarro County had 33 servicemen lose their lives in World War II, 22 men killed in the Korean War, 19 killed in the Vietnam War, and 19 in the War Between the States. Mr. William O’Brien, gave the ultimate sacrifice during the Global War on Terror on March 15, 2008 in Iraq. His Mom will speak at the ground breaking on November 2, 2019, as will another Gold Star Mother, Rachel Hawthorne. Tim Gauna was killed during the terrorist attack against the USS Cole on October 12, 2000.

The Bill McNutt Family Fund, established by Lee William (Bill) McNutt, has funded many Navarro County projects including bringing three Congressional Medal of Honor holders to speak to local students in October of 2012; providing the custom bronze statue of the Collin Street Baker in downtown Corsicana, unveiled in 2017; and the creating of the Texas Veterans Parade held on Armed Forces Day each May on the historic brick streets of Corsicana.

If your band, choir or service organization would like to participate in the groundbreaking ceremony, please contact Joe Hill, the Co-Chairman of the Texas Veterans Parade organization at (430) 775-0856.

Ennis Lions defeated Corsicana Tigers on Nov. 1 2019, to claim the 1st Medal of Honor trophy named for Jack Lummus from Ennis and Spider Garcia from Corsicana. Both were recipients of the Congressional Medal of Honor. ...