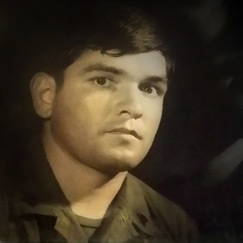 Candelario Garcia, Jr., better known as Spider Garcia, was born in Corsicana, Texas, February 26, 1944, and was of Mexican American descent.

Garcia distinguished himself on December 8, 1968, as a team leader during a reconnaissance-in-force mission near Lai Khê, Vietnam. Garcia destroyed two enemy machine-gun positions in an attempt to aid casualties that were in the open and under fire, then rejoining his company in a successful assault on the remaining enemy positions. Garcia was originally awarded a Distinguished Service Cross on 4 April 1969 for this action. The award was rescinded on 18 March 2014 under Permanent Order 077-34. 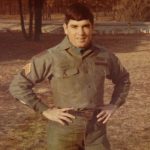 He received the Medal of Honor, posthumously, from President Barack Obama in a March 18, 2014 White House ceremony. As Garcia had been a former “Big Red One” (1st Infantry Division) soldier, the 1st Infantry Division’s Command Sgt. Maj. Michael A. Grinston received the medal on behalf of Garcia and his surviving family members. Garcia’s surviving Family members had asked the division to represent him in the White House ceremony and the Pentagon ceremony inducting him into the Pentagon Hall of Heroes.

The award came through the Defense Authorization Act which called for a review of Jewish American and Hispanic American veterans from World War II, the Korean War and the Vietnam War to ensure that no prejudice was shown to those deserving the Medal of Honor.

You can read the full Citation at the Congressional Medal of Honor Society website.

Statue of Candelario “Spider” Garcia near the Navarro County courthouse

List of Medal of Honor Recipients for the Vietnam War (Wikipedia)

Not forgotten: Garcia to be recognized with Medal of Honor (Corsicana Daily Sun Article)